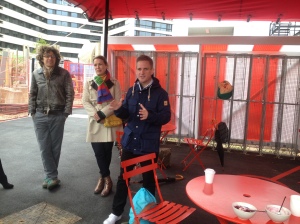 He is – I shit you not – the Project Manager of a new swimming pond that’s launching in King’s Cross very soon.

As a fan of nominative determinism, I couldn’t help but be tickled when I heard this last week at the British Library. Ian started his speech on ‘Wild Swimming in the city’ by telling us that he is the proud winner of an award from Camden Council. It’s official, he has The Second Most Aptly Named Job Title in London. I’ll tell you who got first prize in a minute.

As well as being the owner of that accolade, Ian is one of the people behind a brilliant new art-installation-come-lido in Kings Cross, called Of Soil and Water. Another example of how Wild Swimming itself is a rapidly growing phenomenon across Britain. And in particular, across the capital (more on that in a few days!).

Anyway, I was lucky enough to go along for a first swim and tour of The Kings Cross Pond Club today, and it was wonderful. You can’t beat the feeling of fresh-water under an open sky at the crack of dawn, as opposed to say, a chlorine-y assault on the senses in a stuffy, noisy indoor pool.

But swimming is only half the Of Soil and Water experience. You’re surrounded by cranes, workmen, building sites, by people gutting and transforming Kings Cross, from every vantage point. It’s very exposed. You feel like you’re on stage at times. (you certainly will once the Viewing Platform is full in mid-Summer). But that’s the point. You’re meant to contemplate, too. You’re meant to think about boundaries.

As the architects – Ooze – explained to us before we were allowed to jump in…it’s about the feeling of being simultaneously inside a miniature landscape, and a building site. It’s a dialectic between being inside nature and a city in transition. And yet it’s strangely harmonious. 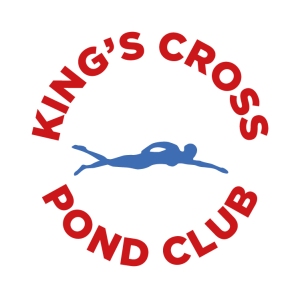 That’s not all. The whole thing is cleaning itself through a network of very clever reeds which I won’t even try and explain here. Suffice to say, ‘it’s a ‘living, breathing experiment… and it won’t be chlorinated. So no peeing in it…’ warned Ian Freshwater.

Which reminds me, I’ve not yet revealed who got Number One in The League of Most Aptly Named Job Titles in London. The winner was another liquid based one: Mr Lee King, who is genuinely the Head of Thames Water.

As a Copywriter with an overzealous awareness of fatalistic wordplay, I’ve been collecting other real-life examples over the years.

I’ll leave you with two favourites: my GP when I was a kid was called Dr Payne. And (sorry) Jennifer Leak, who is genuinely a breast feeding coach.

If you’ve ever come across any other nominative triumphs you’ve been itching to share until now, do feel free to add to the collection…

Failing that, you can take a dip in the lovely Kings Cross Pond from Friday 22 May 2015. Keep an eye on the pondsite for more details.