I wouldn’t wish a break-up on anyone. But if you do happen to find yourselves in a similar position to the characters in my book; or if like Ally Sheedy’s character in The Breakfast Club, you have nothing better to do, then here’s a rough guide to creating your own warm, fuzzy and prosperous BUC…It feels pressing to point out that ‘The Real BUC’ was nothing like this um, regimented – these are based on the fictional one! Here goes. 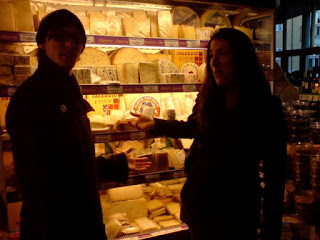 (here’s Mark, one of our Co-founders, and Lauren, foraging.) 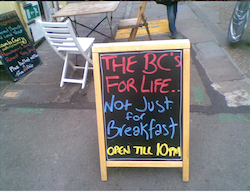 Sod Disneyland: this is the happiest place on earth. You cannot be depressed about having had your heart ripped through your bum – in here, while surrounded by all the warm eightees nostalgia and pancakes with bacon, banana and maple syrup. It’s so wonderful that I had my 30th here and even once interviewed the rather lovely BC founder, Jonathan (aka Ferris)

Since then, there are now about a hundred branches of The BC all over London, so those living in the capital can have their pick. The Angel one’s the cosiest and most fun. So much so that ‘The Real BUC’ and I are going back there tonight for dinner! There’s a bunch of other places to go but I’ll be exploring them in another post called the ‘Heartbreak Guide to London’, coming soon to the internets.

*More on Boyfriend Packs in another blog

Originally posted on PUB LDN | Rare People:
Introducing?Rare People; a series where we will hear all about what the people of Publicis do when they’re not busy making?ads. Big shoutout to Wes for photos. Lorelei Mathias, Senior Creative and talented Writer/Performer, is this week’s feature in the 2nd edition of Rare People around 82 Baker…

Marvel At My Badly Taken Insta-Pics