A while ago we wrote about the Poetiquette campaign that’s been up on the tubes. A lovely way to encourage people to be less self-involved while they’re travelling.

They’ve now awarded a winner – Jennifer Dart from Rayleigh in Essex, who saw off competition from over 6,000 aspiring poets to be crowned the official winner of the Travel Better London poetry competition.

The poem, which was written on the topic: ‘Avoid Unnecessary Delays. Don’t hold open the doors’, was crowned the winning entry by a panel of judges including Aisling Fahey, Young Poet Laureate for London, writer George the Poet and Sophie Baker from The Poetry Society.

Her verse has since been immortalised in cartoon form, complete with her very own caricature. It is now being displayed on buses and Tubes across the Capital. 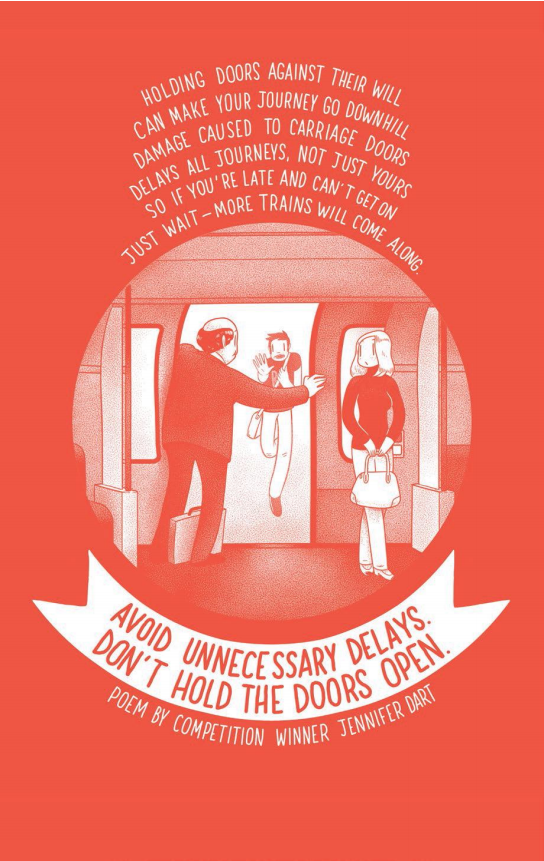 TfL’s Travel Better London campaign was launched in September 2013 when colourful poetry posters designed by the artist McBess were showcased on London transport encouraging people to consider their fellow passengers when travelling.

There was also another lovely element to the campaign a few years ago – something I just discovered that a copywriting-poet-friend of mine called Amy Acre did with M & C Saatchi. She was hired to be writer-in-residence on various sites all over the tube, writing impromptu poems about little stories of TFL etiquette.

My personal favourite is this one – Your Butt is a hero. Go Amy.

A Song about free school meals, based on Oliver Twist. Dedicated to (Sir) Marcus Rashford. First broadcast on Channel 7 for The Treason Show. Directed & Produced by Mark Brailsford. Written by Lorelei Mathias with Phil Johnstone.