…was Trevor’s subject heading when he first told us about the Jack and Ada Beattie Foundation. 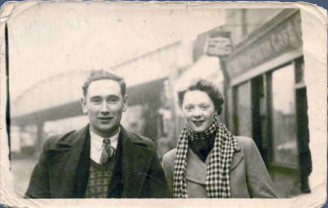 Jack and Ada are Trevor Beattie’s late, great parents. An inspiration to him (and now us all). So much so, he set up the charity in their name.

That’s what we often say in advertising – some days you have an idea and you want to defend it from all possible enemies that come along and fight for it no matter what. Other days, you just know it’s not going to come out how you want it, it’s not worth fighting for and it’s a ‘get it out the door’ jobbie. And rather than getting frustrated, you just know it’s about choosing your battles.

That’s kind of the thinking of the Beattie Foundation. It sets out to solve managageble problems and achieve small, realistic goals. Rather than solving world peace this second, or tackling climate change by next week, The Beattie foundation is about fighting battles we can win.

Like assisting the vulnerable and marginalised of the Midlands and London, with grants of between £500 and £2,000 to individuals and charities whose aspirations match the spirit of Jack and Ada. And like supporting the D-Day Veterans to the Gift of Flight for the disabled. Hence their mission statement:

“Knowing that someone is fighting your corner is half the battle won.”

But that’s not all you can win.

On Friday 18th November, if you come along to the Landmark Hotel Gala launch event and bid, you might come home with anyone of these frankly LUDICROUS prizes:

– A private flight for 2 to witness The Northern Lights.

– An afternoon at the BBC, sitting in on the Richard Bacon Radio Show. With a celebrity guest of your choosing.

– Your portrait by Rankin.

That’s just a taster. If you’d like to get your hands on any of those, you can apply for a gala ticket here

You can also check out the Beattie Foundation site which explains the cause and the people they’ve already helped much better than we can.

18 thoughts on “The Most Important Thing He’s Ever Done”

Deep Blue Day... :) went on a swimming micro-adventure, from the idyllic boho treehouse bar on Silent Beach to the Jamaica Huts, landing at the desert island paradise /blingy W hotel of Maenam for a hilariously overpriced windfall Coconut and a display-only swimming pool (is there anything SADDER?). So pretty though. #swimming #sharetheswimlove #drybags #beachhopping

We Digress: Why I wrote my new comedy ‘Life in ADHD’, which I’d love you to watch

Hello to my loyal followers from over the years… sorry there’s not been another book since Break Up Club!! Working on one now…:) Before news of that I wanted to say this: Thanks for enduring a tsunami of ADHD related content on my socials the last few months. Hope its given you some insight into […]