In a week where compassion and community spirit kicked the ass of wanton destruction and senseless riotism, we wanted to do a quick round-up of the most amazing sites which have been set up. Oddly, pretty much all of the people behind these sites seem to work in advertising.

Helpsiva.com; Keep AaronCutting; This is Our London.com; Operation Cup Of Tea ; Something Nice For Ashraf; (done by an ex- BMBer, Jamie Cowen.) Although there are so many people much worse off than Ashraf, there was something so disturbing about this film clip that it’s not hard to see why this campaign spoke to so many people. It was so great to see Ashraf on the news last night – amazingly showing no bitterness for his assailants; only sympathy. You have ’til midday today to donate to Ashraf, otherwise there are links on the site to many other people in need.

And last but not least, the Banksy of the Riots, Photoshoplooter who would like to remain anonymous but has already made it into a book which is on sale now. Some of the proceeds go towards the cause. Get it on your coffee table now while you still can.

In the midst of such nihilism, it’s been heartwarming to see people rallying round so much. What worries me slightly is there must be loads of other victims who haven’t been lucky enough to be given such amazing PR – It’s hard to know how to get to them. Hopefully via http://www.riotcleanup.co.uk/donate.php

Totally unrelated to the riots, but no less warm-and-fuzzy-induing, we saw these on our way home. 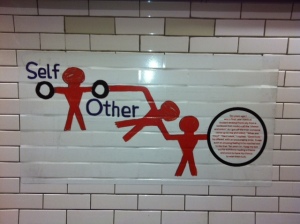 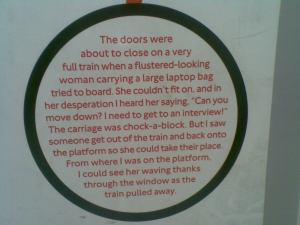 I saw the ad for it a couple of months ago and meant to blog about it but forgot. But now the campaign is live, they are all over the tube and it’s fun spotting them. More wonderful stories here.

Finally, back to the riots, this article in the Torygraph of all places is eye-opening on the issue of looting. The looting that goes on at the top of our society, that is. Well worth reading.

Have a safe weekend.

14 thoughts on “Acts of Kindness”

Marvel At My Badly Taken Insta-Pics